Because of its significance and all the resources involved, our flagship project was the renewal of the active fibre optics network, which involved the replacement of 35,000 terminal devices in customers’ homes. This project was completed in the record time of nine and a half months. The new network has allowed us to increase the speed of universal service up to 300 Mbps, and to reduce problems by 80%. In addition, it is given a score of 8 out of 10 by our customers.

Another important achievement from 2017 has been the improvement of the television via IP platform, which will allow us to offer customers new services in 2018, such as having programs from the last seven days available on demand, online recording or the option of being able to see live broadcasts from the start of the program.

In 2017, capabilities were expanded to improve mobile telephone service in areas without much coverage, thus improving the speed of both 3G and 4G. Up until now, 4G coverage had been given priority in inhabited areas, but in 2017 a significant effort was made to expand it to cover the highway network and mountainous areas such as Vall de Madriu, Coll d’Ordino, Vall de Setúria, Vall d’Incles, Vall de Ransol or Port d’Envalira.

As for the 3G network, it has increased the capacity of low frequencies to allow for higher speed in interiors and greater roaming capability. In addition, 3G coverage has been expanded in areas that only had GSM or tunnels to increase data speed.

Throughout 2017, other significant projects were also carried out, such as the improvement of virtual switchboards, the modernization of IP transport networks and the amplification, diversification and technological evolution of international voice and data links. 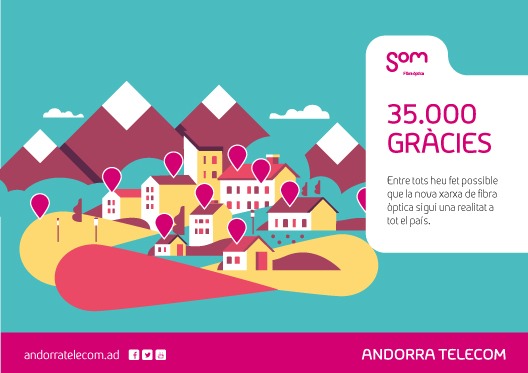